Doing it all – interview on Working, Writing and Empowering Women

Extract from The Act of Writing:

I imagine you come here with expectations. You want to hear tales, of the sari, of the mango, of cows and cow hooves kicking up a dry dust you will want to wipe off with a scented handkerchief. You want to hear of lavender, of turmeric, of jasmine soothing the hot summer evening in a distant tropical country. You expect to be told stories of a certain woman, a certain man in a certain way. You want to feel, but nothing beyond the ordinary, nothing you cannot stomach along with a thick steak, the knife a tad bloody from the rare meat.

Prepare then to be annoyed. Prepare to shake your heads at the lack of clichés. Prepare to throw away the book even. Prepare to be angry that anyone can write these stories nowadays, and no longer is it the right of the powerful, the strong, the erudite. That anyone can now take up a pen, a laptop and float words on the page, dipping into history and geography and creating; creating that which needn’t have been, or having taken form deserved to be demolished.

The story I want to write may be nothing you expect, or may be everything you desire. I don’t know yet you see. I can write about the place I am from, the shores I went to, the people I met. I can write about the accidents, the tragedies, the way people lost breath when they didn’t expect to, or were maimed and silenced. The blood which flowed when people attacked others, their homes, their bodies. Inspired by the books on war, I can, for example write about gas chambers or the site where a nuclear bomb ripped the soil and its heart, or I can write through the eyes of a little child whose parents kissed and were shot in front of his eyes. Except that it has been done before, in ways fourscore and one. I can write about the betrayal and naivety which led to foreign countries ruling my own, but that too has been done; the red and blue flag has been replaced a million times by the tricolor and evil has always been shown to be white. But why, I can fly across continents and write about modern wars, the one where planes drove into tall, proud towers, the one which is continuing everyday as delusional youth wield axes and knives or guns or strapping explosives on themselves aspire to explode and achieve heavendom, annihilating innocent people. Moved by the video of the civil war and watching neighbours bomb the Stari Most, I can explore the strife in countries far from my own.

There is so much to write.

But yes all that has been written before and I want to write something new, infinitely precious. So let me do this, a simple tale. A story told in three days…

Read more at The Citron Review.

‘It was a pleasure to read Mona’s writing for the first time, when she was shortlisted for the SI Leeds Literary Prize, and to introduce her work to the world. She is a writer of rare bravery, putting forward a manifesto against the tropes and delighting in subverting expectations.’ Roopa Farooki

Mona is a finalist in the Eastern Eye Arts Culture & Theatre Awards (ACTA) for her memoir A Roll of the Dice.

Winner of an Eyelands Book Award 2020

Mona is the winner of the Eyelands Book Award 2020 in the Memoir / Historical fiction category for A Roll of the Dice.

What the judges said :
‘This is a story of loss, love and genetics, as Mona Dash, the author, indicates with her subtitle and indeed each one of these themes plays a key part in this very sensitive memoir about the adventure of a mother whose newborn baby’s life is in danger. But this is just the beginning of an astonishing narrative of a contemporary life drama. Perfectly written in an unadorned, powerfully subtle style, demonstrating a deep knowledge of human – and especially female – nature, without superfluous outbursts and therefore even more stunning. A Roll of the Dice is at the same time touching and riveting from cover to cover.’

Mona’s interview with poet Usha Kishore in the Setu

UK : I have read this book, a few times. Each time, I could feel the tears well up in my eyes and hope filling my heart. Did you think that A Roll of the Dice would affect emotional healing?

MD: Thank you, that’s so gratifying to know! I hadn’t thought of it as helping anyone else heal. I think, for me it had been about sharing information, giving hope to anyone fighting and trying to overcome the odds. It was all about a struggle.

When one faces a terrible loss, everyone says time heals, and though it is such a cliché; time does dull the sharp edge of pain. But healing comes only when you face the intense pain and then transgress it. Healing is soothing, subtle! So, I am really touched when someone says they found the book healing. For a writer, this is the greatest gift!

UK: I am really inspired by the epilogue – the reflections on faith. What made you include this epilogue?

After going through this veritable rollercoaster of a journey, I wanted to end on a note of calmness and stillness. I wanted to highlight my own learnings, but not in a preachy dos and don’ts manner. I felt this was the best way to write it, and the publisher had commented that ‘it read like a prayer.’ It is also a reminder to myself, that things may not always be ideal, but it is important to remember that ‘light enters through the chinks, to know that your life has to go through the struggle it has chosen.

Two poems, Implications and The Poet in Business are published in the Organizational Aesthetics journal 2021. Mona was one of the editors of this special issue dedicated to poetry.

Read The Poet in Business here.

See Mona read her poems with a literary forum, The Gronthee, UK

Click here to see Mona read her poems with The Gronthee.

See Mona in conversation with a book blogger forum, Writersmelon

Click here to see Mona in conversation with Writersmelon.

MonaDash3 weeks ago
Yet whenever I cross the river
On its bridge with wooden piers,
Like the odor of brine from the ocean
Comes the thought of other years. #bridge #antrimcastlegardens #antrim #poetry #poetrycommunity #poetsofinstagram

MonaDash @Dash2Mona
2 days ago
I am so thankful and proud to say this brilliant writer took time out to support me with her author quotes on two of my books- #ARolloftheDice and #LetUsLookElsewhere out on 19th June @DahliaBooks. Congratulations Irenosen 👏🏽 https://t.co/Turf5sSC1W
View on Twitter
0
3 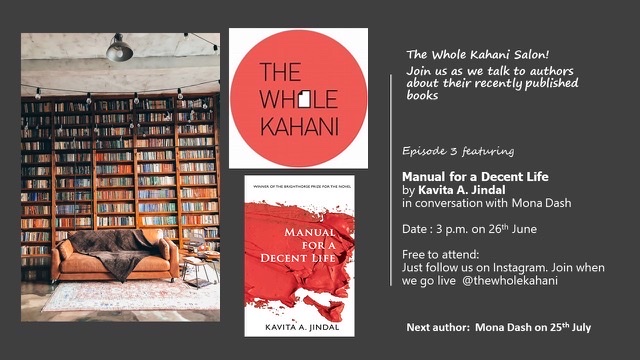 Kavita A. Jindal @writerkavita
I'll be reading from MANUAL FOR A DECENT LIFE and taking questions at 'The Whole Kahani Salon' on 26 June at: 3 pm BST, 10 am EST, 7.30 pm IST. Join in via @instagram. Try not to ask me anything embarrassing, although I think I'm not easily embarrassed. #bookchat #novels https://t.co/FmCyDNjrMC
1
3